Bordeaux and Burgundy seem to get all the attention, but the Loire Valley might be home to some of the most exciting wines in France. Made in a variety of styles, and generally more affordable than other French wines, the area has long been known for its zippy whites, juicy reds, elegant sparklers and mouthwatering dessert wines. 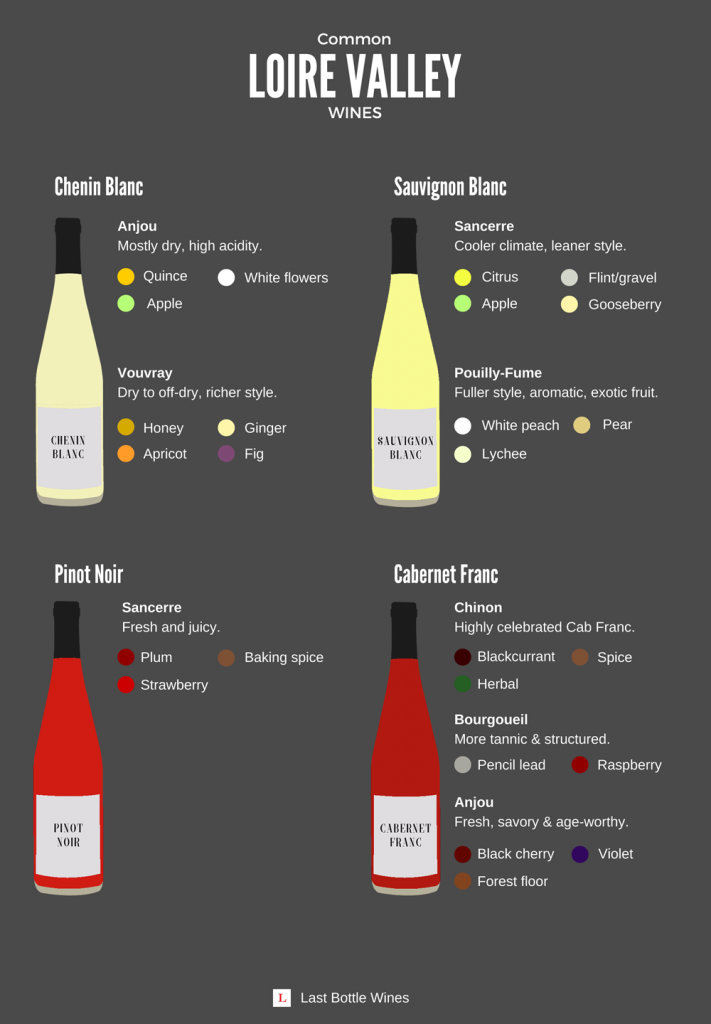 Known as the “garden of France”, Loire is home to scenic rolling hills, grand castles, ancient towns, and over 4000+ wineries. The region stretches over 600 miles east to west across the middle of France starting near the Atlantic and ending near Burgundy. Like other French wine regions, production is tightly segmented by the land, with 80+ appellations spread between lower, middle and upper regions.

Bring a jacket if you travel here. Even in the summer, where the average high temperature hits just 64 degrees. This cool climate makes for inconsistent vintages as grapes struggle to fully ripen before harvest. 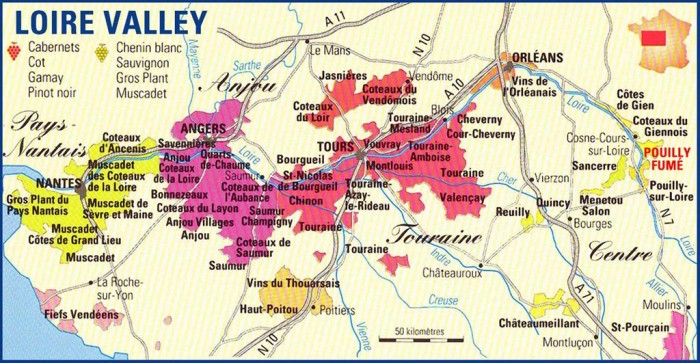 Strict rules govern the types of wines grown in each appellation. White wines dominate, with Chenin Blanc taking center stage. It’s produced in a wide range of styles, from totally bone dry to sweet. Still relatively obscure on the market, but gaining in popularity, people love Chenin Blanc for its distinct flavors of honeysuckle, lemon, herbs, and its bracing acidity.

“As a longtime fan of Loire Valley wines, I’ve never understood why they’ve remained so affordable. (Not that I’m complaining, of course.)” – Lettie Teague

Sauvignon Blanc also has a firm establishment in the region, most notably in Pouilly-Fume and Sancerre. While red wines aren’t as common, some incredible Cabernet Franc, Pinot Noir, and sparkling wine comes from Loire, along with small amounts of Melon de Bourgogne and Gamay.

The smallest part of Loire is perhaps the most famous thanks to two appellations – Sancerre and Pouilly-Fume.

A small amount of Pinot Noir and Gamay also grows here. For those of you looking for a cheaper alternative to Burgundy, red Sancerre is insanely drinkable with juicy, laser focused red fruit and a light to medium body.

Just across the Loire river sits Pouilly-Fumé, where Sauvignon Blanc takes center stage. Several kinds of soil give it a layered profile. Clay soils at lower elevation result in a richer style, with potent aromatics and more exotic fruit flavors. Grapes grown in silex (flint) show a smoky gunflint profile. A few years of aging usually helps integrate these richer flavors. Neither Sancerre or Pouilly-Fumé see oak, and both show off a laser-focused acidity.

Other notable AOPs include:

This sub-appellation of Touraine pumps out more Chenin Blanc than anywhere else in France. But the unpredictable climate means quality varies between vintages. Cooler vintages lean toward the dry style, while warmer ones favor a sweeter dessert style wine. When Mother Nature plays nice the results are epic. Some sweet Vouvray can age up to 100 years.

White wine dominates in Loire. That’s not the case in Chinon, where some of the most recognized Cabernet Franc is grown. Vineyards planted on steep slopes along river banks host a variety of rugged soils – Jurassic rock, hard gravel, and limestone. The lower slopes produce more approachable wines, with notes of blackcurrant, anise and trademark herbal qualities. The steeper slopes at higher elevation produce more structured and tannic Cab Franc that tends to age better.

The town of Angers and Saumur represent the largest portion of this region and form the Anjou AOP, with 46 associated communes. Some of those include:

Also known as the Pays Nantais, the Lower Loire is closest to the coast. That makes for a  cool and rainy climate that favors white wine production.

The largest AOP in the area, and home to Melon de Bourgogne (aka Muscadet), an inexpensive and not terribly complex wine. Basically it’s a lean, minerally wine that’s best enjoyed over a casual lunch.

This small appellation is home to the only rosé in the Lower Loire, where it’s made in a fruity, dry style using Gamay or Cab Franc grapes.

Just below Nantes, and also home to Muscadet grapes. The difference is here many producers age their wine sur-lie, and then bottle the wine without racking or filtering. That results in a cloudy wine with a creamier texture.

Loire wines might still be unappreciated when compared to other regions in France, but don’t let that fool you. Places like Sancerre and Pouilly-Fume set high water marks for their Sauvignon Blanc while Chinon and Bourgueil define Cab Franc. The sheer variety and style of wines makes it one of the most dynamic and interesting wine regions in the world.