Wine has a long history of health benefits extending as far back as the record books go. The ancient Egyptians touted it as a cure-all for the poor, weak, and sick, but as marketing and consumerism evolved, a whole new breed of products emerged. And in many cases the cost for these goods and services became more prohibitive than proletariat. 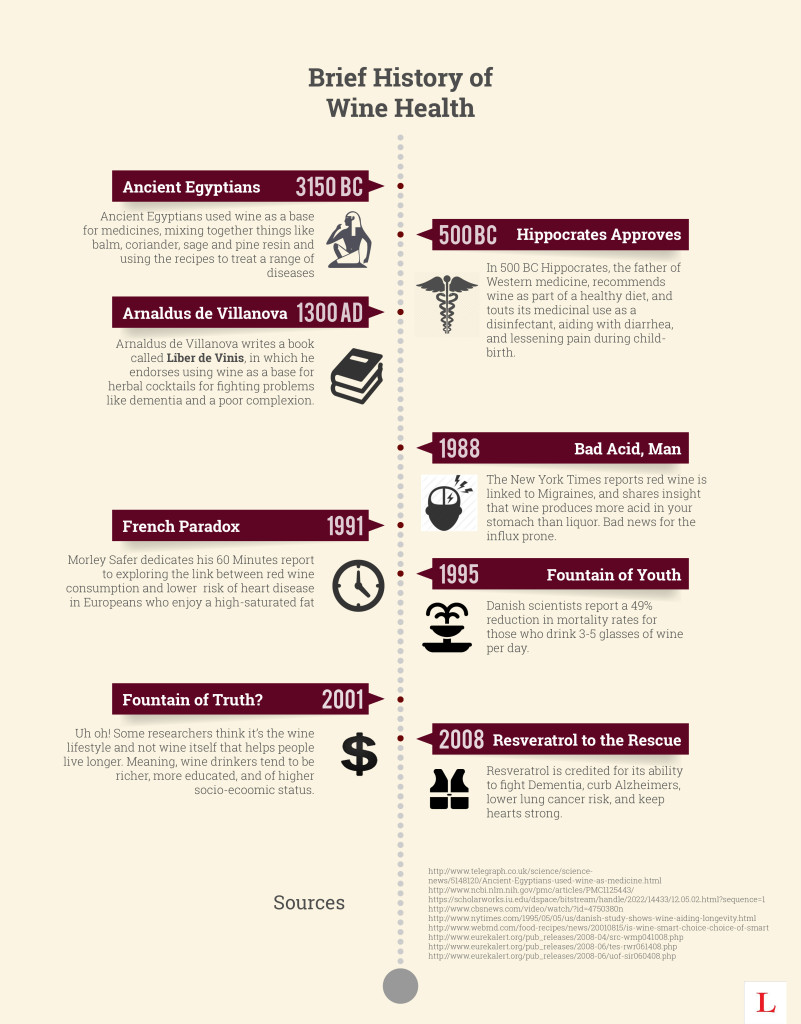 We already know that wine is basically the fountain of youth in a bottle. So it’s no surprise to see a myriad of health products and techniques tied to our favorite adult beverage. From reduced wrinkles to enhanced energy and less cellulite, proponents of these approaches make some bold claims about the positive effects. Today we look at some of the most intriguing (and questionable) alternative health remedies people have extracted from wine.

“100 gallons of your finest Beaujolais please – and make it extra hot.”

One of the most bizarre alternative health treatments using wine is known as “vinotherapy” and it involves taking a steaming hot bath in red wine.

Perhaps the most  example of vinotherapy takes place at a spa in Japan. During a span of 12 days each year, the Hakone Kowakien Yunessun spa in Japan fills their hot tubs with sake, green tea, and red wine. Entire families flock to the spa to get their soak on, and plenty of anecdotes exist on the TripAdvisor page claiming positive effects. Apparently Cleopatra regularly took wine baths – and she isn’t the only famous person who thinks its worth a dip. 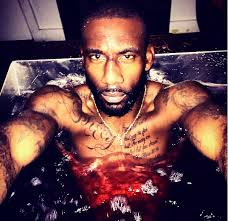 NBA pro Amar’e Stoudemire has been trying “vinotherapy” since 2010. A prominent advocate of vinotherapy is Caudalie Spa, owned by Mathilde Cathiard-Thomas and her husband Bertrand Thomas. They created a line of beauty products made from grape by-products and build the world’s first “wine spa” in a Bordeaux castle. Their approach hinges on a notion that polyphenols in red wine “offer unequaled action against free radicals at the very heart of the cell” yet they have not published any scientific research to back their claim.

We’re reminded of the Patch Adams scene where one of his patients goes for a swim in a pool of noodles, which could prove equally rejuvenating and with the going rate for bulk spaghetti, much cheaper. 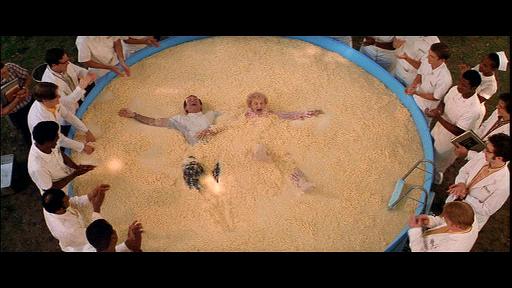 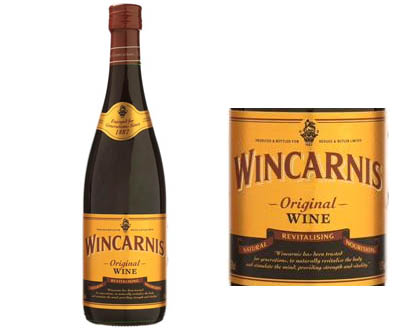 This interesting tonic wine first appeared in the year 1887. The original formulation included “extract of meat”, an ingredient that has since been omitted. Even without the dose of liquid iron, people still buy Wincarnis. Today it’s described as a “blend of enriched wine and malt extract infused with a bewildering variety of botanicals including gentian root, mugwort, angelica root, balm mint, fennel seed, coriander seed, peppermint leaves, cardamom seeds and cassia bark”. It was originally marketed toward nervous women, but as time went on the company decided men could also benefit from the bewildering variety of botanicals. 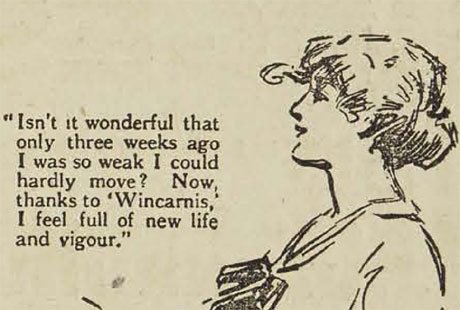 Why aren’t we surprised this strange concoction comes from the same people who brought you another quasi-medical beverage called Vin Mariani?

“You know what would pair nicely with this Bordeaux? A little cocaine!”

This general cure-all was invented by Angelo Mariani and included 6mg of cocaine per ounce of liquid. 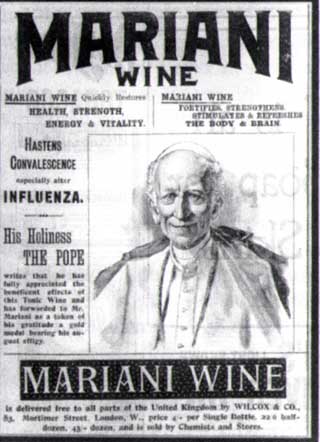 The cocaine-infused tincture gained in popularity after a keen advertising campaign showed it as the favorite pick-me-up of people like Thomas Edison, Queen Victoria, the Czar of Russia, Pope Saint Pius X, and Pope Leo XIII, who served as a holy spokesperson in an advertisement for the tonic. Thomas Edison endorsed the wine, claiming it helped him stay up longer and Ulysses Grant used it as he wrote his memoirs later in life. 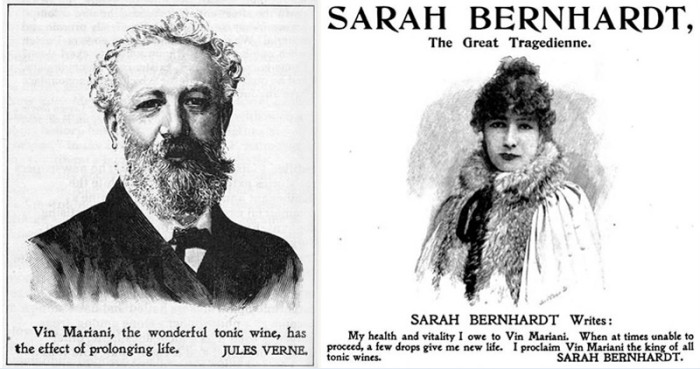 After the Pure Food and Drug Act of 1906 rained on the cocaine and heroin-infused cocktail parade, the company behind Vin Mariani switched up the recipe and delivered a non-alcoholic version made with cola leaves and kola nuts. We know it as Coca-Cola.

“I can literally feel the DNA synthesizing with my core being.”

Vino Vera offers perhaps the most complete lineup of wine-infused skincare products, with varietal names like “Merlot”, “Shiraz Instentic”, and “Malbec DNA”. Primarily aimed at rejuvenating skin, they offer products with vitamin A, vitamin E, and of course Resveratrol. Of all the treatments so far, this product probably has the most legitimate, scientifically-backed benefits. This one downside? It isn’t cheap and a complete “Malbec DNA” system will put a serious hurt on your wallet at $5,000.

“Hey man, you ever seen the back of a wine label…on weed?” 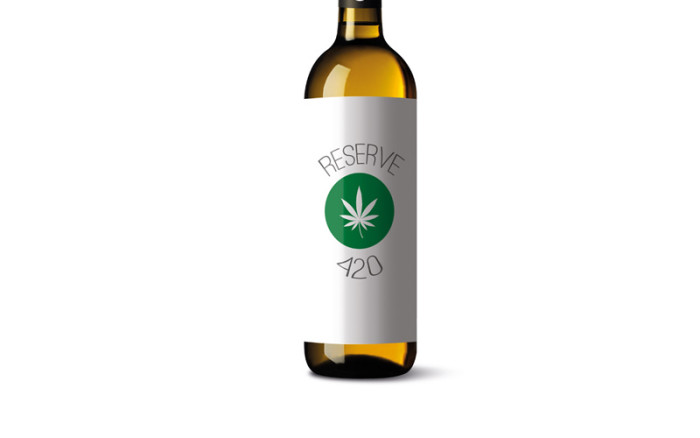 Super Silver Sauvignon Blanc anyone? You probably noticed a rise in states legalizing marijuana over the past few years, and it’s only a matter of time before a commercial pot-infused wine offering emerges. And why not? Combine the many proven benefits of medical marijuana with those of wine and you basically have a new superfood. This wouldn’t be the first time wine was mixed with exotic components. A decade ago an ancient wine cellar in Israel was unearthed and 500 gallons of wine were found to contain certain psychoactive resins.

The idea of marijuana-laced wine isn’t new, and big media outlets like Vice and Elite Daily went into a lengthy exploration on the subject. Melissa Etheridge, a vocal proponent of medical cannabis, created her own special wine tincture called “No Label” which she sells through Greenway, a medical marijuana club in Santa Cruz. In an interview with CBS she said, “You feel a little buzzed from the alcohol and then get a delicious full body buzz,” when describing the effects. Given the pain relieving effects associated with alcohol and pot, it’s not hard to imagine it having a legitimate level of treatment for chronic pain.

As legalization continues to go mainstream it seems more likely that a winemaker might put a special “reserve” barrel aside each vintage. Only time will tell.

Having never tried any of these products we can’t say whether they belong in the snake-oil section or not. Then again, the power of placebo is very real, so how can we fault someone for believing they’re experiencing true results? Let us know what you think in the comments below.