We’ve all seen that conspicuous warning on the wine label.

Sulfur Dioxide (SO2) is one of the most controversial wine ingredients. You’ve probably heard someone lament about it causing headaches. And hangovers. Or faulting sulfur as a prime example of “unnatural manipulation” in winemaking.

Before we explore some of the common myths about sulfites in wine, let’s figure out why that frightening message even appears on labels.

It all started when a group of neo-abolishonists propositioned Sen. Strom Thurmond.

Strom was an outspoken teetotaler. He actually once took to the senate floor to rally against Spud Mackenzie — who was in his mind a reckless “party animal” encouraging the youngsters to drink. Soon after that episode he pushed forward legislation as part of the 1988 Anti-Drug Abuse Act requiring the “contains sulfites” message on every bottle with more than 10ppm/L of detectable sulfites. 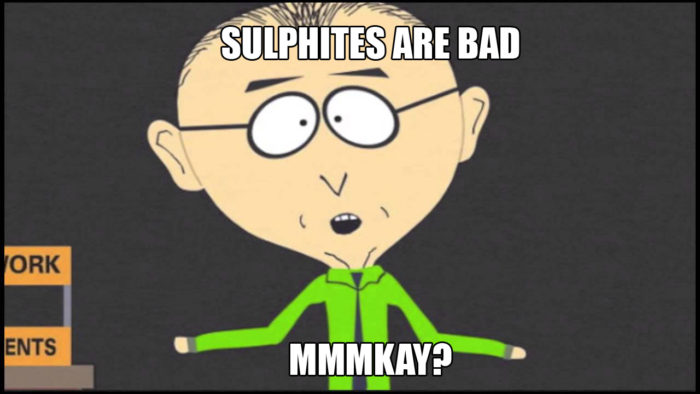 Why add sulfur to wine?

First, you should know sulfur is a byproduct of fermentation. So every wine, even ones explicitly labeled as “sulfite free”, includes trace amounts of sulfur.

So why add more sulfur to a wine?

The naturally produced sulfur might keep wine fresh for a couple weeks or months before bad things start happening (volatile acidity, “mousiness” and brettanomyces to name a few). Adding extra sulfur keeps the flavors fresh and greatly reduces chances of the wine spoiling.

How much sulfur is in my wine?

It varies, but in general you can expect somewhere between 100-200 ppm/L.

3 common myths about sulfites and wine

Natural and organic wines might not contain added sulfites but sulfur is a byproduct of yeast metabolism in winemaking. So even low/no sulfite wines contain a tiny amount, maybe 5-10ppm/L.

Actually the opposite is true. White wines tend to have more sulfites. That’s because red wines have more tannins, which work as a stabilizing agent, so they require less sulfur.

Sulfites cause headaches and hangovers

We all know someone who constantly laments the awful headaches they get when they drink red wine. The sulfites they say! They’re to blame. First of all, less than 1% of the US population (two tenths of one percent to be exact) has a sulfite allergy. So strictly going by numbers, sulfites likely aren’t the problem.

Plus, a 2008 study in The Journal of Headache and Pain on alcohol and headaches said that even in individuals with asthmatic sulfite sensitivity, sulfites have not been shown to cause headaches. The study also added, “On the other hand, there are many foods such as dried fruits, chips, raisins, soy sauce, pickles and juice fruits containing concentration of sulphites [sic] even ten times higher than that of wine.”

Don’t hear many people complaining about the migraine they got from eating Raisin Bran, do you?

If you’re still hell bent on removing sulfites from your wine, there are products (like this, or this) out there that promise to filter them from your wine. Otherwise, you probably don’t have to worry about much unless you’re one of the unfortunate few who have a legit sulfite allergy.