Fun fact about lobster – way back when, only poor people, servants, and prison inmates ate the stuff. Prisoners in Maine were fed so much lobster they rioted. Indentured servants in MA sued to include a clause in their contracts refusing to be eat lobster more than 3x per week.

“Lobster shells about a house are looked upon as signs of poverty and degradation,” wrote John J. Rowan in 1876.

Over time these bottom feeding sea bugs clawed their way up to the top of the luxury food ladder. Today lobster rivals filet mignon in price per pound. 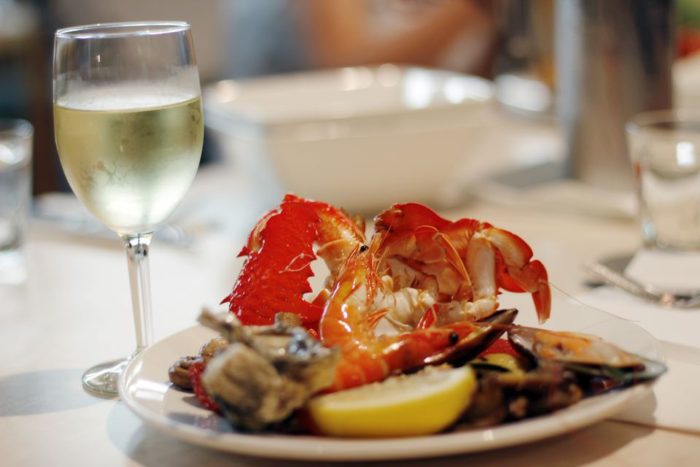 Started from the bottom feeder now we here…

When you’re balling out on $20/lb shellfish you need something equally satisfying to drink that completes the meal.

Here’s what we suggest.

We’re talking about Chardonnay of course.

Chardonnay has so many styles, but most share some common ground in the form of citrus/lemony flavor. It’s like a squirt of lemon. Our go to for just about any lobster recipe is a medium bodied chard with just a kiss of oak and partial malolactic fermentation. Something balanced, with enough refreshing acidity, minerality, and ripe fruit to compliment, but not overpower things.

A heavier, creamier style compliments the rich/buttery texture of lobster and on the opposite spectrum, a zesty, unoaked version brings a nice contrast to the richness of lobster meat. Of course if you need to ball out, you can happily step up to a Grand Cru White Burgundy.

The contrarian: Gewurtztraminer, Riesling, and Viognier

This trio has a few things in common. They’re medium to fuller bodied and bursting with fragrant aromatics. Sometimes they bring a touch of sweetness.

You could go with a off-dry Riesling or Gewurtz if you’re pairing with some spicier Asian fare. A bone dry Riesling should do nicely with a richer lobster mac or bisque. Viognier has a nice weight to it that would stand up to just about everything.

Fantastic choices for pairing with more exotic dishes like this roasted lobster with ginger that’s made with some Alsace Gewurtz. Serve with the same wine used in the recipe and you have maybe the most perfect pairing here.

Wine and food pairing works on different levels. Sometimes you want complimentary flavors between the food and wine. Or maybe a contrasting flavor in the wine highlights some almost imperceptible spice in the food. Other times you want textures to work together.

That’s where we’re going here. Lobster and the weighty texture of Viognier makes a solid pick. Also a stylish Chenin Blanc, specifically Savenierres, should work in the same way.

If you’re making a decadent lobster mac and cheese, best bet would be pairing it with a high acid wine like Sancerre, Pouilly-Fume, or Albarino. A fuller bodied wine like Chardonnay or Viognier will simply be too cloying. These wines also do especially well with a simple lobster roll – think of them as the twist of lemon to accent the richness.

Champagne might be the ultimate baller choice. Ideally, a vintage selection, or a grower producer. In a pinch you could settle for a non-vintage and survive just fine. The fine bubbles cut right through the fatty butter, making every bite as bright as dawn on your tongue.

Have a favorite lobster and wine pairing we didn’t mention? Let us know in the comments.