We get positively giddy when a container of Châteauneuf-du-Pape lands in the warehouse. Just hop right on a pallet and start flossing all over the place, much to the embarrassment of the youngins in the warehouse crew.

That’s because Châteauneuf is, without a doubt, one of the most flat out enjoyable wines to drink.

Robert Parker knows what’s up. He built his reputation on Bordeaux, but CdP is what he’s feeling now that he’s older and doesn’t have the time to wait 20+ years for great Bordeaux to enter a drinking window.

“As I’ve grown older I’ve developed an appreciation for wines that are immediately gratifying but that can also provide great satisfaction over several years…Today, the wine that I find myself turning to most often is Châteauneuf-du-Pape.”

With depth and complexity to keep even the most scrupulous connoisseur intrigued, they’re also accessible enough so a novice can take a sip and confidently proclaim “damn, that’s good!”. As far as collectible, age-worthy wines go, CdP is enjoyable upon release but has the stuff to last a decade or more easily. And prices remain affordable, at least when compared to classified growth Bordeaux or high end Napa Cabernet. 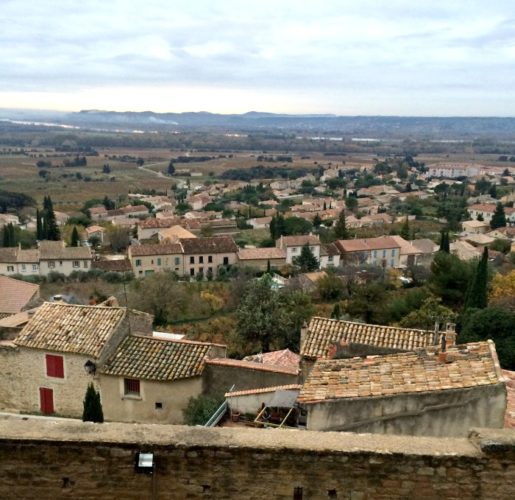 The name “Chateauneuf-du-Pape” means “new castle of the pope” and refers to a time in history when the Catholic church moved the pope from Rome to the walled city of Avignon, France in the 14th century. Today the bottles still retain the distinctive papal regalia embossed on the glass.

Positioned at the very south of the Rhone region, Chateauneuf shares very little in common with its northern counterparts. In the north, in cooler places like Cote-Rotie and Hermitage, Syrah plays the central role. Here in the south it’s all about Grenache (indeed the motto emblazoned on shirts is “In Grenache we trust”).

Before WWII much of the CdP was sold to Burgundy, used to bolster their blends with a deeper flavor and provide extra alcohol.

The weather, the terrain, and the native plants each play a role in shaping Chateauneuf.

Chateauneuf is bordered on the west by the Rhone river, with the imposing Mount Ventoux stationed on the east. Gently rolling hills and plateaus connect the four ancient villages found within its boundaries.

At first glance, the landscape doesn’t look like a fertile breeding ground for world class wine. Many of the vineyards are filled with large round stones, called “galet roules”, which tumbled down from glaciers moving through the area thousands of years ago. These stones actually play an important role. They retain heat, and keep the vines warm late into the night, which helps grapes ripen. They also protect the soil underneath, helping retain what little moisture has been stored up. 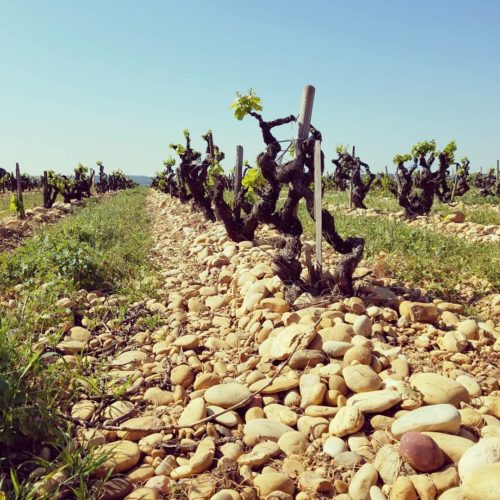 Spend time drinking CdP and you’ll hear the phrase “garrique” used to describe the aroma or flavor. Garrique refers to a savory mixture of marjoram, rosemary, oregeno and thyme. These bushy herbs grow wild all over the region, in particular around Chateauneuf, often between rows of vines. Their aromatic oils and terpenes impart their way into the wines and lend some unique aromatic nuances to the finished product.

Then there’s the mistral. A powerful, bone chilling wind that rips down from the Alps and across the land. On any given day it tears through at 30-50 mph. It helps in a few ways. It keeps nasty bugs, mold and mildew from settling on the grapes (sort of like  and cools the vines during abnormally hot spells.

Speaking of hot spells, the region is home to some of the warmest temperatures in the country. This elevates sugar production in the grapes, which results in high octane wines. It’s not uncommon to see 15-16% alcohol levels.

A total of 23 principal and secondary varieties are allowed in southern Rhone. Thirteen of those are allowed in Chateauneuf, including grenache, syrah, mourvedre, cinsaut, muscardin, counoise, vaccarese, terret noir for reds and grenache blanc, clairette, bourboulenc, roussanne, picpoul, picardan for whites.

Grenache generally serves as the base for CdP blends, but it’s a tricky grape to grow. In the wrong conditions it comes off as thin and one dimensional or overripe and hot, with sky high alcohol levels. But in Chateauneuf they coax it into a refined, elegant, and powerful example with exceptional depth and character.

Typically the flavor profile contains a nice mix of red fruits, kirsch, raspberry, dark cherry, along with savory spices, leather, and a bit of funky earthiness. The funk in particular is something Southern Rhone is known for, and can be attributed to the presence of brettanomyces. Some folks like it. Others hate it. If you open a bottle and notice a strange barnyard smell, give it an hour or two to breathe and it should blow off.

Organic and sustainable farming is the norm here, and there’s a heightened reverence for the land. Growers can only irrigate the vineyards twice per year, and only if really necessary, so they’re basically dry farming all this old-vine fruit.

For grenache to perform its best, the vines must be pruned and trimmed to keep yields low and focus concentration. The region has the strictest rules about yield in all of France, with a limit of 368 gallons per acre, which is about half the yield of Bordeaux estates.

Yield isn’t all they’re strict about; the landing of flying saucers is strictly prohibited and any found on the land will be promptly taken to jail. No joke. It’s in the official municipal decree from 1954.

Beyond grenache, most blends contain a balance of syrah, mourvedre and a smattering of the remaining red varieties to fill the void.

Chateauneuf-du-Pape is often vinified in concrete because it’s prone to oxidation. It rarely sees heavy oak, making it a great choice to pair with food. Some producers make a lighter style, sharing more in common with Burgundy, effusive aromatics and bright fruit. Others prefer a denser, concentrated style.

Lesser known, and produced in much smaller quantities, the whites can show some serious depth and good examples can age 5+ years with grace. Beaucastel makes probably the most famous one, a 100% Rousanne that’s unequaled in terms of aromatics and complexity.

Finally, it’s worth noting that some vintages outperform others. We’ve been especially fond of the 2015 and 2016s, two vintages which were just off the meter. They’ll go down as some of the best ever. Other good vintages include 2007, 2005, 2001, 1998. So if you want to dip your toes into some good CdP, keep your eyes peeled for those years.