Put down the Pinot Grigio. Pick up the Albariño.

There’s nothing “wrong” with Pinot Grigio. Slurpy somms and jaded retailers tilt their noses at it, often writing it off as “insipid” or “anemic” but really it’s a fine gateway wine, fruity and easy drinking, if not very complex. Inevitably there will come a time when you want something with a little more verve. More substance. Something with all that peachy, tart apple, citrusy goodness of Pinot Grigio plus a little extra brain tickling power.

That something is a bottle of Albariño. Just look at this absolutely-not-made-up chart of imaging scans showing cranial activity in people who drank three popular white wine varietals: 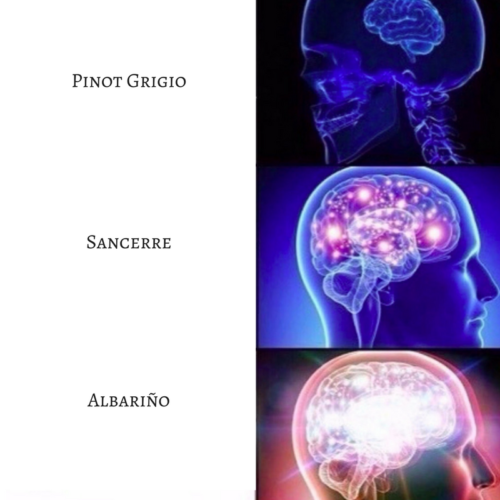 Enlightenment! Clarity! Diamond-like brilliance ensues after just one sip! But seriously though, Albariño will light up your neural pathways in ways Pinot Grigio simply cannot.

Spain’s Rías Baixas (ree-as buy-shuss) D.O. is a small region, and they produce a proportionally small amount of wine. Only ten grapes are grown there, and Albariño accounts for 90% of production.

Most Albariño from Rías Baixas is pale yellow in color, crisp, elegant, and beautifully refreshing, especially in warm weather. It’s almost always made as a single varietal wine, though sometimes it’s blended with other native grapes including loureiro blanca, godello, treixadura, and caiño blanco. Generally speaking, Albariño from Spain shows more consistency, but the smaller production levels tend to drive up demand, and thus prices might be a little higher.

The Riax Baixas region is made of several coastal inlets along the Atlantic, which brings plenty of fog and high rainfall.

Portugal’s Vinho Verde region lies just south of Riax Baixas, across the river Minho which separates the two countries. This much larger region is home to 47 grape varietals, less than half of which are Albariño. Here it’s often used in blends, which tend to be light-bodied, crisp, and even slightly effervescent. Still, you can find plenty of single-varietal examples, some of which display immense structure and complexity. Because of the larger scale production here you’ll probably find more variation in quality, however the prices are usually cheaper.

Albariño in the new world

Albariño is a rare sight outside these two regions, but you can find a smattering of vines planted by intrepid growers in California, mostly in the Carneros region of Sonoma, Clarksburg, Edna Valley, some vineyards along the Central Coast, and even deeper inland in Lodi. Its rise in popularity is still relatively small. It went from a scant 28 planted acres in 2003 to a slightly less anemic 280 acres in 2014. That’s a far ways off something like Chardonnay which boasts almost 100k acres, or even Pinot Gris, which tips 16k.

Other regions worth noting include Australia (Barossa Valley, McLaren Vale and Eden Valley) and some adventurous producers in both Washington and Oregon.

Do you like slurping down oysters? Ever been addicted to those tongue-meltingly tart lemon warheads? Is stone fruit season your favorite time of year?

If you answered yes, then you’ll probably love Albariño.

Take the floral aromatics of Viognier and the granite minerality of Mosel Riesling, then borrow some citrus and acidity from Sancerre and grassy notes from a New Zealand Sauv Blanc and you might begin to imagine what’s inside the bottle.

Albariño could taste like grapefruit and peaches. Or honey-drizzled melon. Or any combination of the following: lemon/lime, dried apricot, melon, pineapple, ginger, mango and honeysuckle. There’s almost always a distinct chalky or seashell-like minerality underpinning the fruit. Ultimately, the winemaking style and vintage dictate what the final product tastes like.

Pétillance
Though not as common by today’s standards, Vinho Verde winemakers used to let some malolactic fermentation occur in the bottle. That made for a very slight effervescence, or pétillance as it’s called. Today that practice is all but abandoned, but some winemakers will use artificial carbonation to add a little fizz to the juice.

Most Albariño is fermented in stainless steel tanks to preserve its fresh profile. It’s generally crafted for early enjoyment, with modest alcohol levels, and it’s not a wine you’d normally cellar for any length of time. Occasionally a winemaker may experiment with oak, which adds structure and weight to the palate. This is more common in warmer years, when riper fruit plays nicer with oak. Some producers like to use partial or full malolactic fermentation to add a little plumpness to the texture along with some toastiness – but don’t expect to find a buttery Albariño. Most of the buttery flavored compound is gobbled up by the yeasts, leaving behind just the texture.

The most dynamic examples see an extended period of skin contact during closely temperature controlled maceration. This supercharges the aromatics, adds a bit of extra complexity, and deeper color to the wine. Some producers will age on lees, a practice that also contributes more depth of flavor and freshness in the final product.

What to eat with Albariño 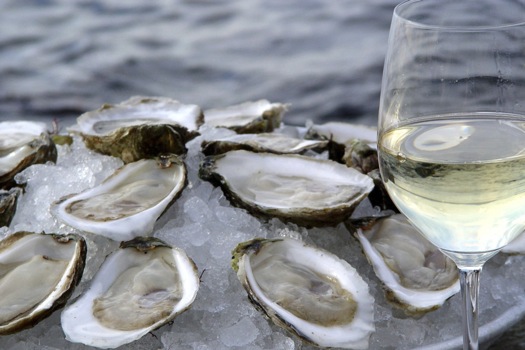 Oysters and Albariño were made for each other.

If it comes from the ocean, it probably pairs really well with Albariño. Albariño pairs great with lighter seafood, oysters, simply prepared mollusks and crustaceans, sardines, ceviche and white-fleshed fish. That’s not surprising since the Riax Baixas is just a few miles from the Atlantic, and the local community is closely tied to the fishing industry. Its zippy acidity makes it pretty versatile with other meals too, from light pastas and chicken to mild Thai and Indian dishes.

In our opinion, Albariño is as accurate a representation of Galileo’s quote “wine is sunshine held together by water”. If you’re looking to take a detour from the mainstream Pinot Grigio crowd, and are willing to try something new, definitely consider adding it to your summer drinking lineup. You’ll be happy you did.