Barbera, The Underdog of Italian Grapes

Barbera is surely one of the most under appreciated wines out there.

Like Dolcetto, it lives in the shadow of the region’s wine nobility – Nebbiolo. It may not have the depth and complexity of Barolo, or the long term aging potential, but it delivers plenty of immediate gratification. Also a great value play.

Because it generally had lighter body and less concentration than the nobler Nebbiolo, Barbera was historically treated like a workhorse grape. It grew readily and was planted widely, but it was considered as only fit for table wine. Thus, little Barbera left Italy. Luckily, that’s no longer the case, and we can enjoy many light, friendly Barbera wines on U.S. shores.

The exact origins of Barbera are unclear, but it is a very old grape – likely one of the oldest in Italy. It is thought to come from northwestern Italy, probably Piedmont. Today it is the most planted red grape in the region.

Though Barbera is now prized for its approachable charm, it can still be thought of as a “wine of the people.” Flavor-wise, Barbera actually has many similarities to Nebbiolo. It tends to be red-fruited, with tart, tangy notes of sour cherry and brambly berries, along with tones of violets, dried herbs, and rustic, turned earth. But while Nebbiolo hits hard on all structural levels, Barbera is more moderate in body and typically low in tannin, though it has that same sharp acidity.

The grape is typically aged in large, old oak barrels, though some producers are choosing to treat their Barbera more highly by aging it in new oak. Lighter versions can be delicious when chilled slightly. The best expression of Barbera comes from vines that have been thinned and trained to yield smaller numbers of more concentrated clusters. These are often classified as “Superiore”.

Barbera’s production is centered in Italy, particularly Piedmont. It typically goes hand in hand with Nebbiolo, so it is grown in many of the same areas. Barbera d’Alba is the most well-known of these, but some argue that since it overlaps with Barolo and Barbaresco, Barbera has to compete for top vineyard sites with Nebbiolo. In nearby Barbera d’Asti and Barbera del Monferrato, on the other hand, Barbera takes center stage when it comes to red grapes.

The grape is also grown in Emilia-Romagna, Puglia, and Campania, where it can be blended with other varieties. Some Barbera is planted in California, mostly in the central coast and a bit in the sierra foothills, as well as Australia and Argentina, but it is really only found in significant quantities in Italy.

Sink your nose into the glass and you’re greeted by a blast of black cherry and red fruit, maybe a touch of oak and spice if you’re lucky.

While not extremely complex, Barbera is easy to pop and enjoy. Its deceivingly dark color that gives way to a much lighter than expected flavor. Flavors hit on a juicy melange of red fruits – plum, strawberry and tart cherry.

Classic examples show a purity of fruit and a light elegance. But many winemakers have adopted a modern approach, trying to craft wines that appeal to international palates. Depending on the oak program you might get some vanilla, clove and tobacco notes too. High acidity makes it ideal for drinking with food. this interesting quality where the flavor comes in hard and fast, and then the acidity whisks it away super quick like.

What to eat with Barbera

A great food wine thanks to the high acidity, low tannins, and bright fruity flavor. Hard to find a soul that won’t love a solid Barbera at the dinner table. Rich, fatty food does well thanks to the acid. 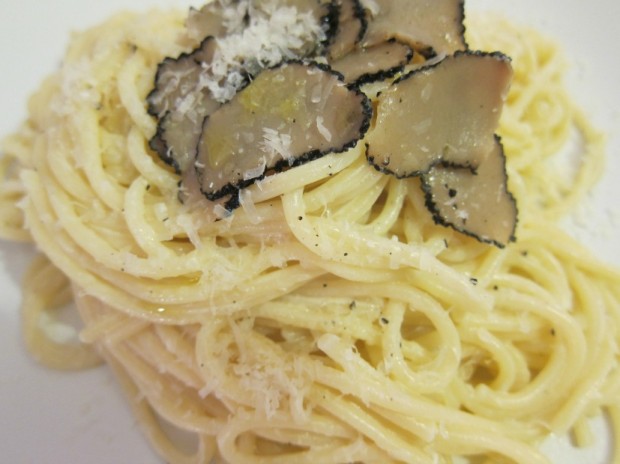 Some possible ideas include:

If any Italian grape has enjoyed a comeback over the past several decades, it’s Barbera. Once relegated to the lesser vineyard sites in Barolo and Barbaresco not optimal for Nebbiolo, it’s now a favorite, everyday go-to for lovers of fresh, thirst-quenching reds.