Brunello di Montalcino is, without a doubt, one of the most highly regarded wines in the world. Adored by critics, collectors, young and old, casual and serious drinkers alike, this Italian red is like a classic Porsche 911. It never goes out of style.

The first traces of Brunello di Montalcino as we know it occur in the 1870’s. Il Risorgimento, the unification of all Italian regions into a single state had just occurred, and heralded the return of a young soldier by the name of Ferruccio Biondi-Santi to his home in Montalcino. He began managing his grandfather Clemente Santi’s estate, the Fattoria del Greppo and developed wine-making techniques that would soon spread all over Tuscany.

Wine Spectator included a 1955 Riserva Biondi Santi on their list of the 12 most memorable wines of the 20th century.

Biondi-Santi refused to mix his Sangiovese grapes with other varieties, as was the custom in Tuscany at the time. Instead he kept his Brunello completely separate from any other variety on the estate – from planting through a single fermentation (winemakers at the time also traditionally put their wine through a second fermentation process). The result was a pure, artisanal expression of Sangiovese that was virtually unheard of and quickly caught the attention of wine makers far and wide. 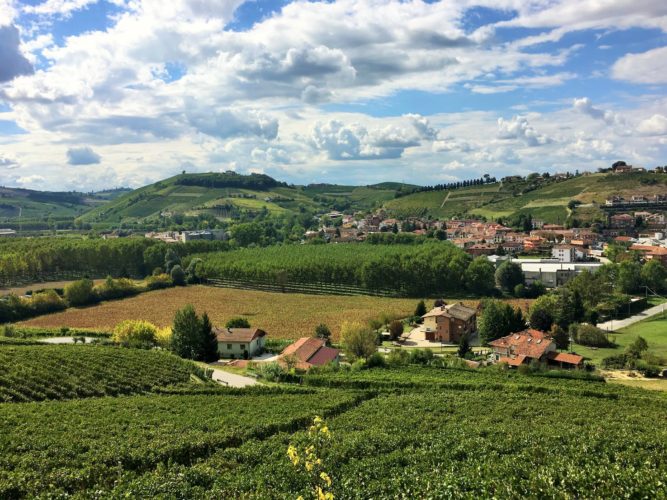 Montalcino is one of the most stunning landscapes in the world.

Biondi-Santi Brunello di Montalcino is still the benchmark producer of this wine today. The traditions of Signor Biondi-Santi are still implemented in its creation, and sampling a bottle of this traditional wine is a goal for many wine connoisseurs today. If one was to be truly lucky, they might sample a Biondi that has been aged for a half century or more. There are Biondi-Santi Brunello di Montalcino wines that date back to the late 1800’s, and tasters all agree that the fruit is still very much present in these rare vintages.

Santi introduced one other tenet to his unique repertoire, and that was to age his Brunello in large Slavonian oak casks for extended periods of time. In fact, it was not uncommon for a barrel of Biondi-Santi’s Brunello di Montalcino to have been aged for over a decade. Upon emerging from the barrels, the wine was remarkably lively and fruity, but also tremendously delicate and complex, unlike anything made in Tuscany to that point.

The larger Slavonian casks are neutral, imparting very little flavor to the wine. The result? A pure expression of Sangiovese.  Wines fermented entirely in these large casks are also quite tannic and that’s why they need many years in bottle to soften soften and become enjoyable. 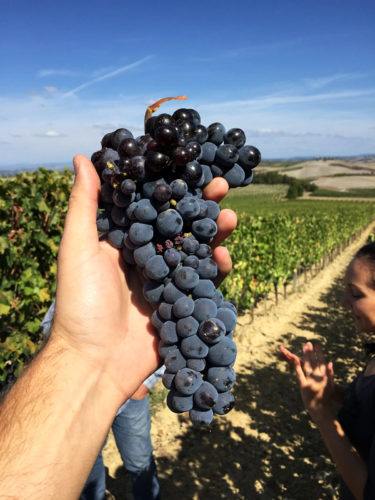 A cluster of ripe Sangiovese grapes at La Fortuna

As modern winemaking techniques became in vogue over the past few decades, many producers in Montalcino ditched the giant wood casks in favor of smaller french barrels. They did this for a few reasons. Consumer tastes were changing. They wanted immediate gratification, and didn’t want to wait ten years before enjoying a wine. Fermenting in smaller french oak also delivers a much different version of Brunello – one with more chocolaty, vanilla, and brown sugar notes and a softer mouthfeel with less abrasive tannins. In short, a wine that’s a little more flashy, fleshy, fruity, and easier to enjoy upon release. But perhaps not as suitable for long term aging.

Of course, the old guard of Montalcino absolutely hated this modern Bordeaux-influenced approach. They felt like the french oak smothered the delicate nuances of Sangiovese. Franco Bondi went so far as to say the small french barrels should be abolished entirely.

Today you’ll find the debate over the “right” way to make Brunello still rages on. Some producers use only Slavonian oak. Some, like Domenic Clerico for example, prefer small french barriques. Others use a mix of the two.

DOCG laws require Brunello to be made from 100% Sangiovese grapes with absolutely no blending. While the composition remains the same, the aging process can differ.

Violation of any of these requirements results in a very hefty penalty. Winemakers who cut any corners or misrepresent the aging process of their Brunello di Montalcino can be imprisoned for up to six years on charges of commercial fraud. Not to mention lose their reputation.

Brunellogate
In 2008 a scandal rocked Montalcino. As darker and more jammy Brunello started becoming commonplace on the market, and some questioned whether these examples were in fact 100% Sangiovese. A major Italian newspaper speculated that some producers were adding other varietals like Merlot and Cabernet Sauvignon to round out their Brunello and make it more fruity, and thus immediately appealing to the masses. No conclusive proof was ever found but several producers were shamed into declassifying their Brunello into the lower Rosso di Toscana wines to move their inventory.

One of the most fascinating aspects of Brunello’s production is the way that terrain, temperature and micro-climate affect this wine. In fact, the perfect vineyard conditions only come around every so often. The most recent exceptional vintage was 2010, but 2015 and 2016 are shaping up to be excellent as well. In the worst years some producers choose to declassify their Brunello grapes into the lower quality Rosso wines – on the upside this can bring some incredible value to consumers.

Vineyards must be planted on exposed hills that do not rise above 1968 feet above sea level. Vines are pruned short and kept low to ensure smaller yields, which means the clusters that do remain are packed with power. This ensures ripeness and flavor in the grapes, as higher elevations will make for cooler climates.

Even the slope of the hill will change the flavor of the grapes, which is why many producers own vineyards on multiple faces in the finest locations and then combine the grapes for different wine styles. The northern slopes of Montalcino ripen slowly, while the southern and western slopes produce powerful and complex flavors after exposure to extra sunlight and the ocean breeze. 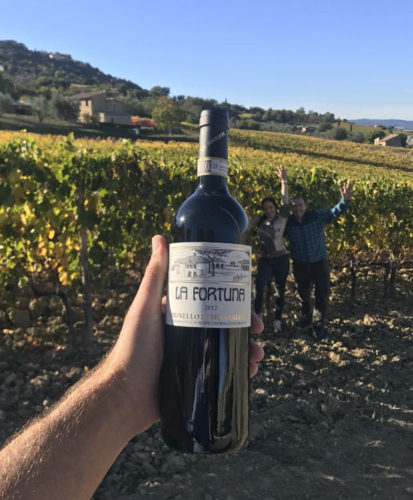 La Fortuna is a producer we discovered on one of our trips to Italy. Super friendly people, and they make some outstanding juice!

The flavor of youth, and other tasting notes

“Young” Brunellos, or those that have been aged under a decade have a markedly different taste than older vintages. From a young Brunello, you can expect bold fruit flavors, extreme tartness and a sharp finish in the mouth that may leave you licking your lips! You’ll detect subtle flowers like violets and potpourri, fruits like cherries, wild strawberries, blackberries and cranberries and earthy notes of soil and espresso.

With at least 10 years of aging, the fresh tartness of the fruit flavors recede and reveal sweeter notes coupled with chocolates and hazel. The acidity mutes and the finish becomes less sharp and striking in older Brunellos as well. You’ll taste figs, sweet cherries, hazelnuts and the notes of leisurely sun-baked leather.

Both young and old will be prone to high tannins, high acidity and prominent fruit flavors that do not recede but merely soften with aging. It can easily age several decades or more.

Any bottle of Brunello di Montalcino should be uncorked well in advance to serving in order to allow it to breathe. Prior to serving, the bottle should be stored in a cool, dark place lying down. It should be served ideally between 64 and 68 degrees Fahrenheit, and if you are serving an older vintage that has been aged ten years or more, the wine should be served in a crystal carafe. Many enthusiasts will let the wine breathe in the carafe overnight to ensure proper aeration and display of its flavors.

Brunello di Montalcino, being an Italian wine, naturally has a home at the dinner table.

It pairs best with heavier dishes, such as red meat, game, mushrooms and truffles. Any dish that consists of meat with heavy sauce coverings will be well-paired as well. To give you some inspiration, consider pairing your Brunello with these rosemary lamb chops  or a dinner of roast duck.

Ferruccio Biondi-Santi was responsible for the first single-varietal expressions of Sangiovese which spawned the birth of Brunello di Montalcino as we know it. Click To Tweet