If you’ve ever come upon a bottle of wine emblazoned with the word “Gewürztraminer” and set it back upon the shelf for fear of trying to pronounce its tongue-twisting name, you’re not alone.

Next time, however, pick that bottle up, put it in your cart, and immediately pop it open when you get home (preferably with some tasty Pad Thai).

Once you get the pronunciation down (it’s geh-VURTZ-trah-mee-ner btw) or simply shorten it to Gewürz (geh-vurtz), and pour yourself a glass, you’ll be introduced to one of the most distinctive and intriguing white wines around.

While Gewürztraminer isn’t as well known as other classic grapes Chardonnay or Sauvignon Blanc, it’s rising in popularity lately – and for good reason.

The first recorded mention of Gewürztraminer appears in 1827, but surprisingly little is known about its origins. Most agree that the grape is likely a clone of the more obscure Traminer grape, and while legend associates Gewürztraminer with the northern Italian town of Tramin, it most likely originated in the German-speaking areas of northeastern France or Germany. The latter, Alsace, is still home to the best examples of Gewürztraminer. Love it or hate it, once you taste this polarizing grape variety, its personality should remain etched in your brain.

The name “Gewürztraminer” literally translates to “spicy Traminer,” which is quite indicative of the wine’s flavor profile. Though it produces white wines, the Gewürztraminer grape’s skins are actually pink, sometimes giving the wine a soft rose gold-like hue.

The wines themselves are ridiculously aromatic, with perfumed notes of lychee (the grape’s most common descriptor), pineapple, honey, orange marmalade, roses, and lavender. Gewürztraminer’s signature spice characteristics – cardamom, clove, exotic mixed spices – erupt from the otherwise round, waxy palate, which tends to have a slightly bitter finish. 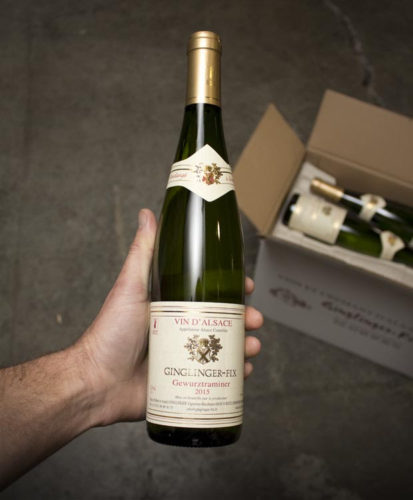 This Ginglinger Gewürztraminer that we import is a textbook example, with all the lychee and spice you’d expect.

Structurally, Gewürztraminer tends to have lower acidity with higher body and alcohol, characteristics that distinguish it from most grapes, and wines usually range from dry to off-dry, though at times they can be downright sweet. Gewürztraminer is also blended with other Alsatian grapes occasionally. Mostly though, it’s bottled on its own.

Unlike other classic grape varieties, there actually isn’t that much Gewürztraminer planted in the world. Cool climates work best for this grape variety, as they help preserve its naturally diminished acidity and prevent the wine from being too alcoholic. That’s why many of Gewürztraminer’s top growing regions are located near the Alps, where elevation and cool mountain air mitigate temperatures.

Alsace, with its sunny strip of land running along the border of France and Germany, is a premier region for Gewürztraminer. It is one of the four noble Alsatian grapes, where it ranges from dry to off-dry for appellation-level or grand cru cuvées, to very sweet for Vendanges Tardives (late harvest) and Sélection de Grains Nobles (botrytized) versions.

Elsewhere, in Italy’s northeastern region of Alto Adige you’ll find some excellent, dry versions of Gewürztraminer. Germany has some planted in Baden and Pfalz and Austria hosts a small number of vines in Styria. In the New World, vintners in California, Washington, New Zealand, and Australia have all caught on to Gewürztraminer as well, where examples are typically dry.

Gewürztraminer’s intense aromatics and tendency to range in sweetness make its pairing options intriguing and variable.

This is also one of our “go to” wines for holiday meals. Bring a bottle to Thanksgiving dinner and you’re almost guaranteed to have a perfect pairing experience!

One great thing about this wine? The price! It’s rare to find one that costs more than $20, and there are plenty of tasty examples in the $10 range, making it an ideal weeknight selection.