What’s the most expensive wine to produce in Bordeaux? Hint: it’s not a dry red from Medoc. Nope, it’s the “liquid gold” Sauternes (saw-turn), a wine made from grapes infested by fungus.

Sauternes is like the OG of dessert wine. Like a true OG, it commands a long history of respect from iconic figures like Napoleon and Thomas Jefferson. Sweet wines have become super popular among consumers in recent years, but Sauternes remains largely ignored in favor of hipper, albeit less complex options (we’re looking at you Moscato). Maybe it’s time for Yquem to sign Drake as a sponsor. 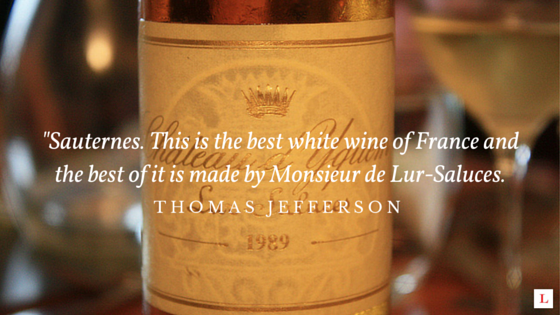 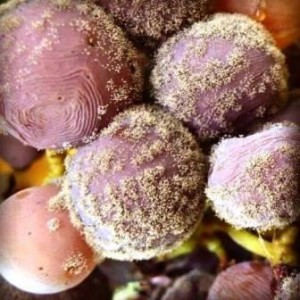 The grapes must ripen to high sugar levels, and then producers wait for Botrytis cinerea (Noble Rot) to infect the clusters before harvesting them by hand.  This friendly fungus drains water from the grapes, leaving them shriveled like raisins, and super concentrated in flavor.

Tasting over the years

You can enjoy Sauternes at any point during its life but the bottle’s age might deliver vastly different flavors. In its youth you’ll find a myriad of bright flavors including apricot, pineapple, peach, nectarines, orange, and honey. The high acidity brings a refreshing edge against the sugar. A great Sauternes can easily spend 100+ years evolving in a cellar. With age comes more complex flavors like salted caramel, a pronounced nuttiness, creme brulée, and toasty brioche. The color changes dramatically from bright yellow to dark copper. 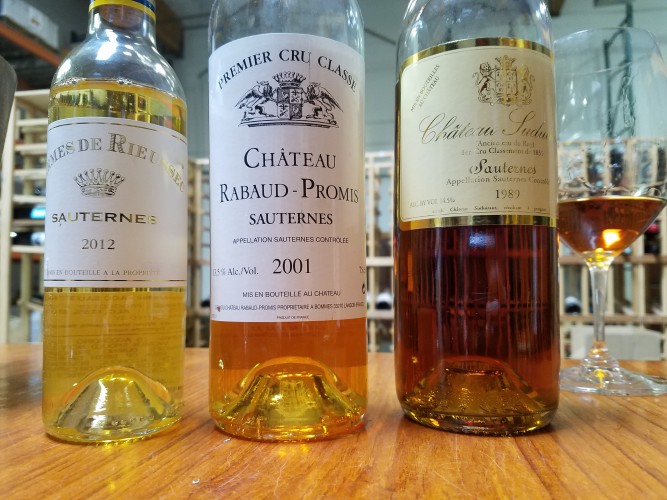 Color changes from bright yellow to dark copper as Sauternes ages. Shown from left to right, a 2012 Rieussec, 2001 Rabaud-Promis and a 1989 Suduiraut

In some years (most recently in 2012) not much, if any Sauternes is made. If sugar levels aren’t high enough or Noble Rot doesn’t settle in, some producers choose instead to make a dry white wine called Bordeaux Blanc. When the conditions are prime however, the extra patience and work involved in making Sauternes pays off big time.

All Sauternes is produced in the tiny Sauternais region of Graves. Here the Garonne and Ciron rivers meet and form a unique microclimate with the perfect requirements. When the cold water of the spring fed Ciron meets with the warmer Garonne, a mist forms and settles on the vines, promoting the Noble Rot fungus. Five sub-appellations (Barsac, Sauternes, Bommes, Fargues and Preignac) can produce Sauternes but only Barsac can label under their own appellation. Barsac Sauternes tend to be drier and lighter bodied than their neighbors offerings. 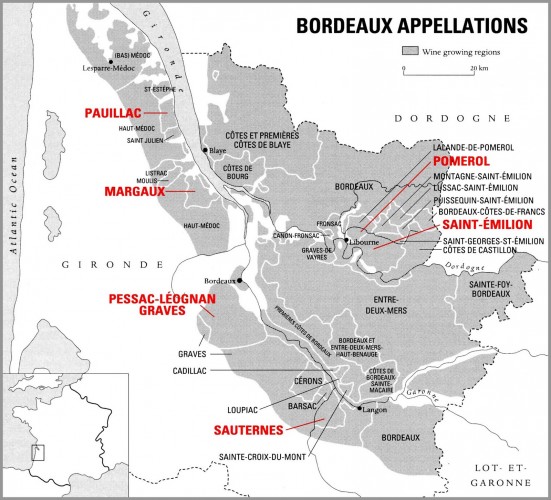 Several labels are consistently recognized as top quality, but Chateau d’Yquem stands above all. The 1855 classification of Bordeaux included Sauternes as the only source of classified whites and gilded Yquem as the superior producer. Thomas Jefferson was a huge fan and mentioned their excellence in his journals. When Jefferson shared the wine with George Washington the President was so impressed that he immediately ordered 30 cases. 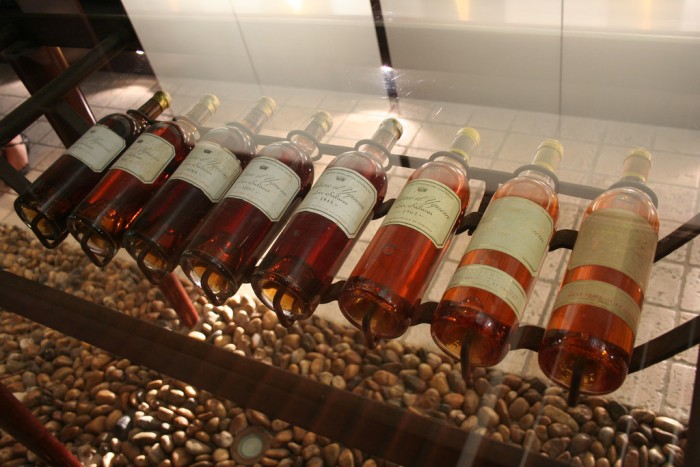 Yquem can age for well over 100 years. Photo by Megan Cole

Prestige comes with a price. A bottle of Yquem will set you back around $500 depending on the vintage. Chateau d’Yquem reigns supreme, but a number of other producers make some outstanding examples.

When you can’t afford the best

In a perfect world we’d all have a few cases of Yquem. Unless you have deep pockets, you need to pick a different producer. 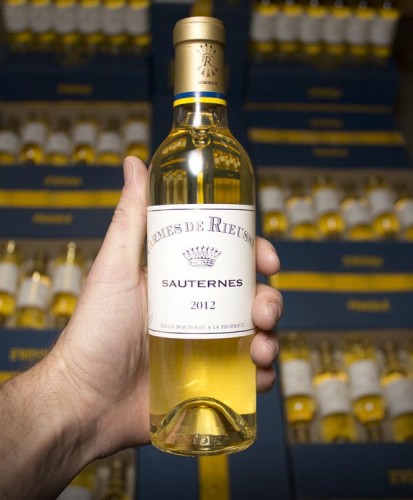 Carmes de Rieussec is the second label Sauternes from Rieussec, an offshoot of Lafite Rothchild. It offers exceptional depth of sweet, honeyed apricots, candied citrus peel, pineapple, guava and coconut. At around $20 for a half bottle it’s a great buy. 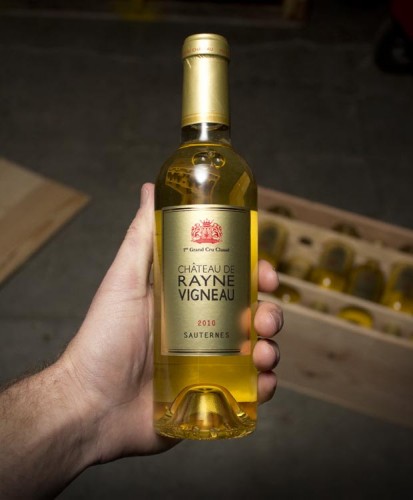 Château de Rayne-Vigneau offers the most wallet-friendly option, priced around $20-30 for a 375ml (we sold it for a cool $12). Supremely rich and textured, this fantastic example can easily stand up to the big dogs.

Château Rabaud-Promis, a lesser known but oh-so-good example that’s slightly less concentrated than a typical Sauternes, with brighter fruit. Keep in mind they produce in every vintage, so do your research. Prices around $50/bottle.

Chateau Guiraud makes some impressive stuff, hitting #4 on Wine Spectator’s 2008 Top 100 list. This sophisticated premier cru delivers incredible complexity and flavor at $75 for a full bottle. You can find a 375ml for less.

The Most Expensive White
In July 2011, a private buyer purchased an 1811 bottle of Château d’Yquem for $117k, setting a record for the single most expensive white wine. 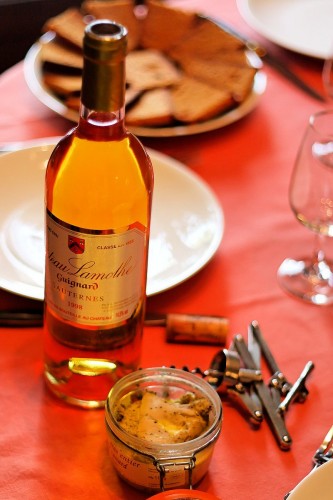 Thought it’s labeled a dessert wine, Sauternes can easily overpower a dessert with its sweetness. Instead the common practice is to enjoy Sauternes with savory foods. The basic idea is to match the intensity and flavor of the wine with the food. A younger, fresher Sauternes might work nicely with lobster while a richer, older one could pair well with blue cheese or foie gras. Some people suggest pairing it with spicy Asian meals, as the sweetness and acidity help cut through the heat. Regardless of what you serve it with, keep it around 52 degrees Fahrenheit for the best results.

Buying tip:  Very few wines offer as much pleasure per milliliter as Sauternes, so we highly recommend finding some liquid gold of your own. If you want to try Sauternes, it’s hard to justify opening a full 750. Even though it’ll stay good for up to a week, that’s a big commitment, even for someone with a sweet tooth. Luckily many producers offer 375ml half-bottles. They’re cheaper, and way easier to justify pulling the cork.