If Nebbiolo takes the throne in northern Italy, Sangiovese holds court in central and southern Italy.

It is one of the two most important Italian red grapes, and in blind tastings, it can actually be confused for Nebbiolo. But unlike Piedmont’s key grape, Sangiovese can work for both quality and quantity. As the most planted grape variety in the entire country, it yields both quaffable, table wines and some of the world’s most lauded, age-worthy bottles.

Thought to originate in southern Italy, Sangiovese is an old grape; some theorize that the name comes from a Latin phrase meaning “the blood of Jove.” Whatever route to prominence Sangiovese took, today it retains a firm hold as a crowd-pleasing, food-friendly red that, both affordable and reliable enough to find a spot at the weekday dinner table.

While most think of Sangiovese as a varietal wine, traditionally vintners blended it with less important grapes like Colorino and Canaiolo. However, since Sangiovese was typically the dominant variety, it strongly characterized its most famous wines. Since it is such an old variety, it has mutated over the years, forming a family of clones that vary from region to region. 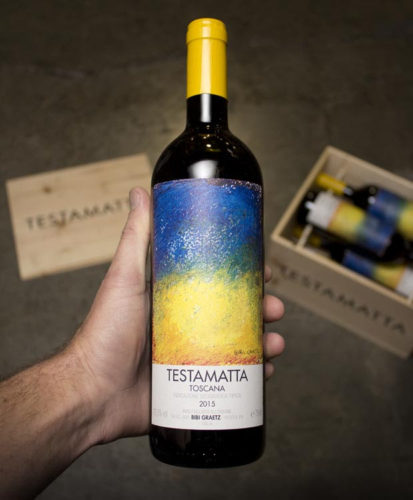 Testamatta is a collector’s dream, and a pure scintillating expression of 100% Sangiovese.

Overall, Sangiovese is a late-ripening variety that can grow in many places but is sensitive to the soil in which it is planted. The wines are typically medium to full-bodied, with characteristically high acidity and moderate to high tannins as well. Thus, it isn’t as aggressive as its sometimes-doppelganger Nebbiolo, but the best, most powerful versions often require aging before being optimal to drink. Flavor and aroma-wise, think of a good red sauce; tart red fruits, like sour cherry, commonly mix with savory mixed herbs, canned tomato, iron, and turned earth. Sangiovese may see some new/used oak, in which case it can develop sweet spice and vanilla undertones, and over time, more complex flavors like forest floor, mushrooms, and smoke often appear.

Unsurprisingly, Italy contains the majority of the world’s Sangiovese vines, most of them located in central and southern Italy. Tuscany is Sangiovese’s mecca, where it sees many different iterations. The most famous is probably Chianti, a fairly large area between Florence and Siena that can produce wines from simple and easy-drinking to robust and layered.

Just east of Tuscany, in Umbria, the Montefalco region blends Sangiovese with the local Sagrantino and other allowed grapes to produce big, rustic reds. The grape also showcases how close France’s island of Corsica is to Italy. Here, Sangiovese is known as Nielluccio and either bottle it as a varietal wine or blend it with local grapes like Sciaccarellu.

Beyond Italy, Sangiovese plantings are scarce, but some inspired producers in New World areas like California and Argentina, influenced by Italian predecessors, make Sangiovese wines with more fruit and body than Old World versions.

They say what grows together, goes together, which is why Sangiovese is a natural pairing for many classic Italian dishes. Tomato-based dishes, roasted mushrooms, slow-roasted meats – Sangiovese is an excellent match. The firm tannins and sharp acidity of Sangiovese make it one of the best food pairing wines overall, cutting through rich dishes and tart ones alike.