California sparkling has come a long way — no, we’re not talking about the Andre in your bottomless mimosas — and the best bottles can not only compete with those of Champagne, but they do so for half the price. 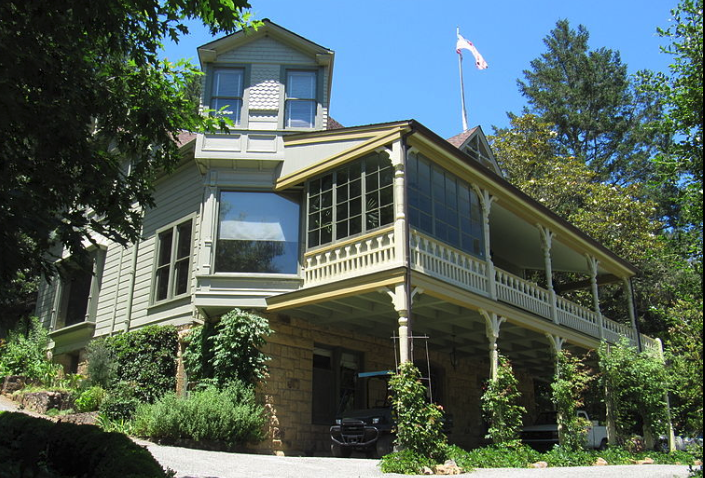 California’s sparkling wine history can be traced back to Sonoma County and the Korbel brothers, who emigrated from Bohemia (now the Czech Republic) and started producing Korbel California Champagne in the redwoods of Russian River Valley in 1882.

But nearly a century passed before California got any real recognition for its sparkling wine production. In 1965, Jack and Jamie Davies bought the historic and totally-run down Schramsberg Winery in Calistoga with the goal of making sparkling wine that could go toe-to-toe with the top bubbly of Champagne. And it didn’t take them long. In 1972, Schramsberg’s 1969 Blanc de Blancs was used for President Nixon’s “Toast of Peace” with China’s Premier Zhou Enlai and became a staple at official functions by every U.S. Presidential Administration since. The fizzy stuff knows no party lines.

The famous Champagne houses took notice of the movement bubbling over (pun intended) in California and many began to invest in the state’s Northern wine country regions. Whether they wanted to admit it or not, California has more favorable growing conditions than their native France that enables wineries to consistently produce quality fruit year after year. Today, more than 300 California wineries produce sparkling wine and these Champagne-inspired wineries —  including Moët et Chandon’s Domaine Chandon, Louis Roederer’s Roederer Estate, and Taittinger’s Domaine Carneros — are now some of the top sparkling wine producers in California and beyond.

There are producers in all California wine regions making sparkling, but a select few AVAs really ace it. Some of the best California sparkling wines are coming out of the Carneros region that borders Napa and Sonoma, Sonoma’s Russian River Valley, and Mendocino’s Anderson Valley. It’s no coincidence that all three of these regions also excel at growing Chardonnay and Pinot Noir.

The biggest difference between California sparkling wine and Champagne is that California doesn’t have to adhere to strict rules that dictate how it’s produced. There’s really only one rule and that’s: you can’t call it Champagne.

Starting in 2005, it was decreed that sparkling wines from the United States could no longer have the word “Champagne” on their labels. Only wines produced in Champagne that follow those protocols we mentioned can be labeled as Champagne. But there is a loophole and a few brands, like Korbel, Andre, and Cook’s, are grandfathered in.

A few California wineries are grandfathered in and can use the term 'Champagne' on their label
Korbel, Andre, Cook’s

Domestic sparkling wines don’t have to be made with Champagne’s Méthod Traditionnelle, which employs a second fermentation in the bottle, though most producers take that route. We won’t name names, but the lower-cost sparklings you find at the grocery store typically employ steel tanks for what’s known as the Charmat Method. 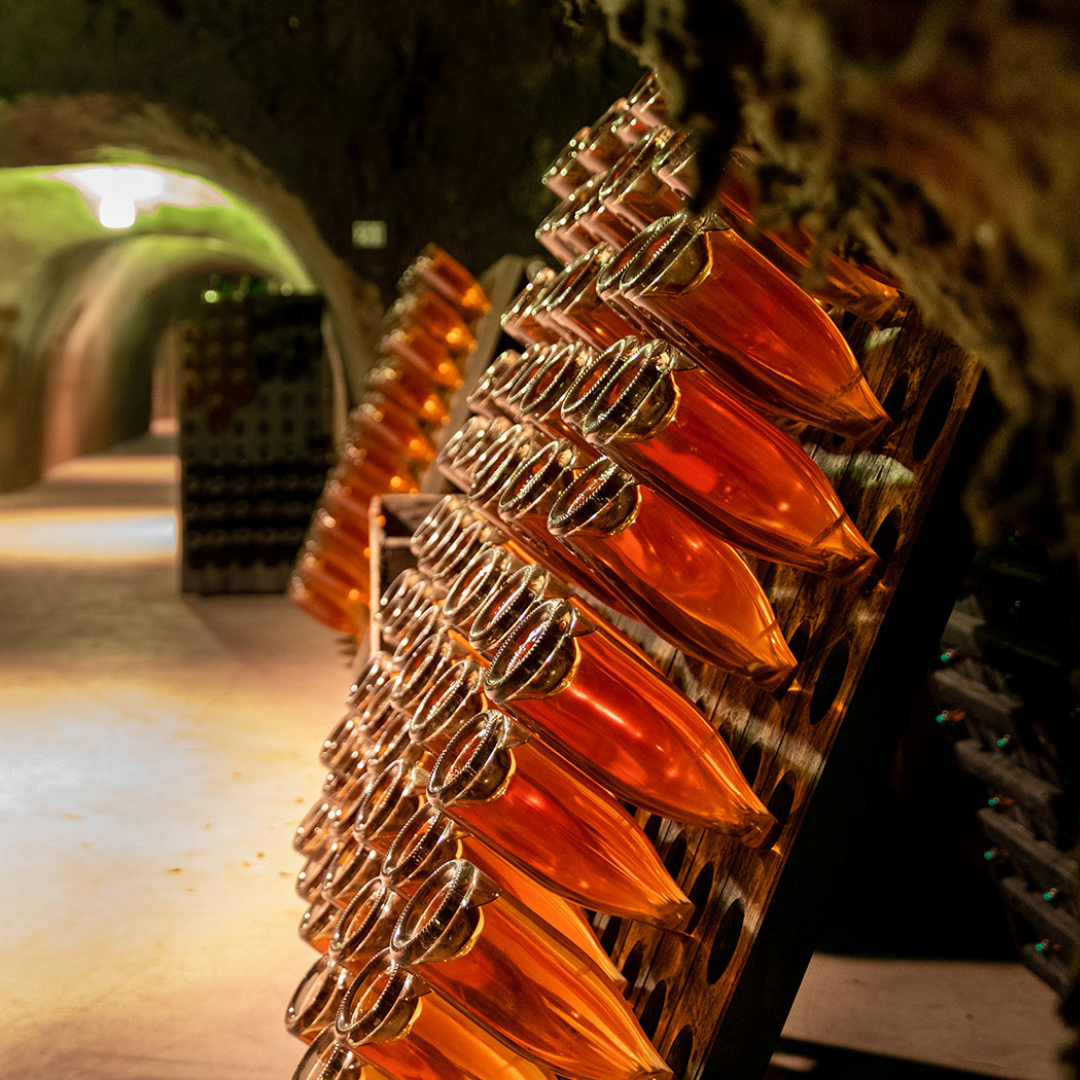 Champagne bottles on a riddling rack

California producers can also make sparkling wine with any grapes they damn well please, because, America! Again, most follow Champagne in that they use Chardonnay and Pinot Noir (plus sometimes a little Pinot Meunier), but more and more California producers are experimenting with alternative varieties, like Sauvignon Blanc, Riesling, and Chenin Blanc.

California sparklings are produced in many of the same styles as Champagne, but, you guessed it, the rules aren’t the same. As a result, there’s less consistency between the styles when it comes to the wine’s grape makeup and level of sweetness. These are the most common.

Blanc de Blancs is made mostly with chardonnay grapes. In Champagne, it must be 100 percent, but there’s more wiggle room in Cali.

Blanc de Noirs is made from red Pinot Noir grapes but is still mostly-clear in color. To achieve this, the juice has very minimal contact with the grape skins.

Rosé sparklings are now a staple in the portfolio of all California sparkling producers. There are two ways that producers generate a light pink hue: they either blend a little red wine into white wine, or they let white grape juice come into contact with the skins of red grapes.

Red sparklings are not something you’ll find often, but some producers, like Domaine Chandon and Mumm, produce limited amounts of red sparkling wine, which is essentially finished red wine that goes through a second fermentation in the bottle.

Pét Nat is what the cool kids are drinking. A shortening of the French term Pétillant Naturel, it’s a growing trend in California and the U.S., especially among natural wine producers. Pét Nat is a more wild and unpredictable sparkling wine that’s bottled while the wine is undergoing its first fermentation. It’s meant to be sipped sooner than later, not aged.

Brut indicates that sparkling wine is dry and contains very little added sugar. Most California sparklings are made in this style.

Extra-dry is a little confusing because it does not in fact mean that it’s extra dry. Instead, it’s actually a step above brut on the sweetness scale.

Demi-Sec indicates a semi-sweet sparkling wine thanks to a little extra sugar than brut or extra-dry sparklings. Slightly sweet sparklings may also be labeled Sec.

California sparklings are lively, crisp, refreshing, and typically more fruit-forward than Champagne. And because they aren’t required to age as long, you won’t often find Champagne’s signature brioche flavor in a domestic sparkling wine.

If it’s salty, fishy, or fried (or best-case scenario, all three), pair sparkling wine with it. You can’t go wrong with the likes of oysters, crab cakes, fried chicken, or caviar.

We noted some of California’s top and most widely-distributed sparkling producers (Schramsberg, Domaine Chandon, Mumm, Domaine Carneros, and Roederer), but there are a handful of others to try for high-quality bubs, like Sonoma County’s J Vineyards & Winery and Ironhorse Vineyards, and Napa Valley’s Paula Kornell.

California Sparkling: Just don’t call it Champagne Click To Tweet California sparkling has come a long way — no, we’re not talking about the Andre in your bottomless mimosas — and the best bottles can not only compete with those of Champagne, but they do so for half the price. Click To Tweet