Champagne: The Cadillac of Sparkling Wine

The signature wine of weddings and New Year’s Eve parties, Champagne has pretty much always been fancy and like a Dior handbag, it has stood the test of time.

But as it is with most fancy or “proper” things (think, the Royal family), Champagne comes with a strict set of guidelines and rules. The first rule of Champagne? It’s only Champagne if it’s from the Champagne region of France. 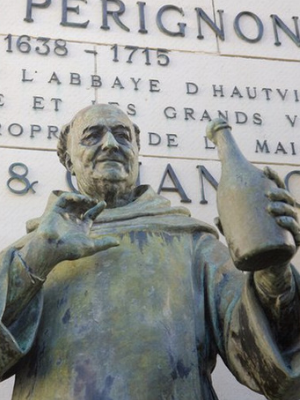 Like Burgundy or Bordeaux, Champagne is named after the wine region it’s grown in. Located in northeast France, about 90 miles outside of Paris, champagne, the wine, was discovered by accident, and no, not necessarily by Dom Perignon. While the famous monk did contribute a great deal to Champagne’s success in the early days, there is no real evidence that he was the first to discover it, or that he actually said, “Come quickly! I’m tasting the stars!”

For centuries, the Champagne region produced still wines, which were held in high regard by nobility and royalty. But Champagne is cold and these cooler temperatures would sometimes halt the fermentation process. Months later in the springtime, the dormant yeast would awaken, kicking off a secondary fermentation in the bottle and releasing carbon dioxide gas that generated little bubbles in the wine. The phenomenon horrified Champagne producers at first, but slowly over the 18th and 19th centuries, sparkling wine rose to power and Champagne became the staple sip of aristocratic life.

In the early 1800s, OG girl boss Madame Clicquot of house Veuve Cliquot is said to have changed the game of Champagne forever when she invented the riddling table. The riddling process helps to remove the dead yeast cells from the bottle, enabling Champagne to be clear, not cloudy.

Today, more than 200 million bottles of Champagne are produced in the region, which is divided into five growing areas: Côte de Sézanne, Côte des Blancs, Côte des Bar, Montagne de Reims, and Vallée de la Marne. Within these communes, there are 42 Premier Cru Vineyards and 17 Grand Cru Vineyards, singled out for their ability to produce Champagne of exceptional quality — and cost.

The Rules of Champagne 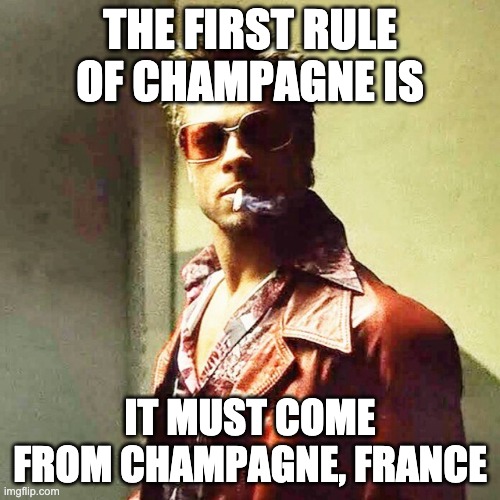 There are three main grape varieties used to make Champagne: Chardonnay, Pinot Noir, and Pinot Meunier. In order to put Champagne on their label, Champagne producers must follow a very intensive winemaking process called Méthod Traditionnelle (formerly Méthod Champenoise and also known as “the Champagne method” or “traditional method”). In the most basic sense, this is a process that utilizes that secondary fermentation in the bottle to create Champagne’s fizz.

Blanc de Blancs is made with 100 percent chardonnay grapes — it translates to “white from whites” — and is typically dominated by lemon and apple flavors.

Blanc de Noirs translates to “white from blacks” and so this light-colored Champagne is made entirely from red or dark-skinned grapes: Pinot Noir, or a combination of Pinot Noir and Pinot Meunier. In order to keep the wine mostly-clear, the juice has very minimal contact with the grape skins.

Rosé Champagnes are a trending category, driven by The Beatles-esque Rosé all Day mania that’s swept across American and beyond. There are two ways that producers generate a light pink hue: they either blend a little red wine into white wine, or they let white grape juice come into contact with the skins of red grapes. 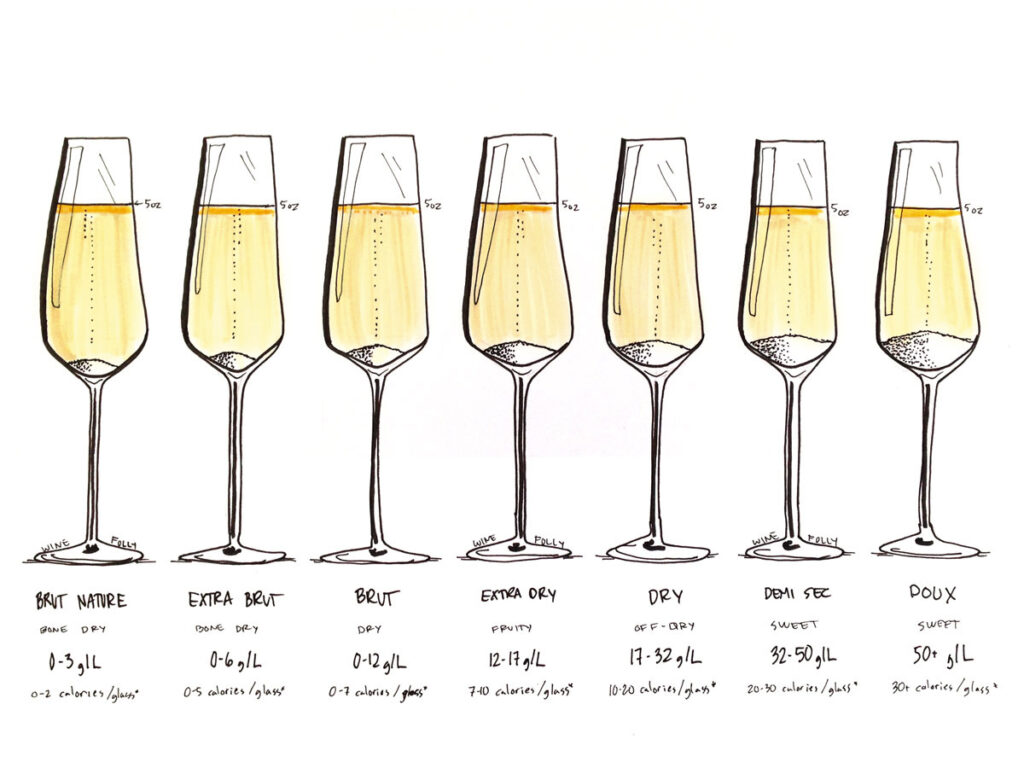 Brut indicates that a Champagne is dry and contains very little added sugar (less than 12 grams per liter by law). Roughly 95 percent of Champagne is classified as Brut, but the sweetness level of Champagne varies based on how much dosage (a sugar and water mixture) is added to the bottle just before it’s corked.

Extra-dry is an especially confusing classification because it does not in fact mean that it’s the driest style of Champagne. Instead, it’s a step above brut Champagne on the sweetness scale, containing between 12-17 grams of sugar per liter.

Demi-sec is the sweetest type of Champagne and pairs best with desserts. Demi-sec sits between Dry and Doux (don’t worry, if this is confusing, you find find those often) in terms of sweetness and sugar levels.

Non-Vintage Champagne is the house style. Bottled each year, these Champagnes contain wine from multiple vintages. Champagne weather can be especially testy, so this gives producers a chance to make wine each year, even if the harvest was sub-par. By law, non-vintage Champagnes must be aged on the lees for a minimum of 15 months.

Vintage Champagnes are aged on the lees for a minimum of three years and are produced from a single vintage when the conditions for grape growing were just right.

Like the Pop Rocks candy of your childhood, Champagne has an effervescent texture that parties on the palate, culminating in a round and creamy mouthfeel. It’s low in tannin, high in acidity, and more often than not dry — though as we mentioned, it is made in varying levels of sweetness. Notes of green apple and citrus are commonplace, but what separates Champagne from New World sparklings is its signature flavors of brioche and almond, which it gets from aging on those dead yeast cells. Yum.

At its most luxurious, Champagne shines as a single lady, seeking the occasional engagement with a bump of caviar. But this is also one of the most versatile wines for food pairings and many Somms will tell you: when in doubt, pour Champagne. When seeking a knockout match, go for food that’s salty, fishy, or fried — or perhaps all three. Fried oysters, anyone?